Did you hear the news?

A bomb exploded yesterday in the center of Istanbul.

Many more were injured.

Soon I was on Istiklal Avenue

There were so many people!

Then I turned right and started walking in the direction of the bomber.

Fifteen minutes before the explosion I saw a cinema.

I went inside but couldn’t find a schedule in English, so I went back onto the street.

I continued walking toward the bomber.

Ten minutes before the explosion I saw a book shop.

Of course, I found the foreign language section.

They’re the same all over the world.

I was about to go back out onto the street when I spotted this: 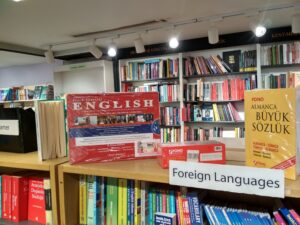 A giant box of English!

Well, that was something I had never seen before.

I picked it up.

I read the back.

I started to think of how I could turn this discovery into a Vitamin V lesson.

Wow !!
You are really lucky guy 🙏
It is a sign that English safes you from bad experience 🙏
Poor people who had injuries but lucky survived 🙏

There is a happy spirit inside your live.. Thanks for your message and the picture! Good Luck further on your way!

It is very good sign. With English we can really solved everything:). Good Luck.

Hi, I’m from Turkey and I live in Istanbul. We are so sorry for this teror attack. We are all mope and angry. In such cases, our internet connection is restricted and we cannot receive news.
I’m sorry you experienced this too

Interesting. I had trouble using my VPN today. Is that why?

I am very sorry for the injured and the relatives of the dead. 🙁

Thank God, He was taking care of you

Today wasn’t your day, our God helped you.
Anyway, Istanbul is an amazing town with an incredible mix of different cultures.
And the Bosforo is something special, it’s a bridge between Europe and Asia continents.

Pay God. You are a lucky man.

Congrats! We lived in Istanbul for 3 yrs and it is beautiful, but some sad incidents may happen there. However, it means something that an English book can also save lives.. Take care! The bad guys will go under for some time now…

Ryan, no place in the World is safe enough. I am very sorry but I am very glad about your lucky.

It is not yet time to leave this world. Thank God,

A lucky man! You will live very long!

This book saved your life.
Lucky you

Istanbul is one of the most beautiful city in the word but one of the most insecure one. Along the years 1997, 2015, 2016 there were many attacs with bombs and many victims. It was a relative period of quiet a few years. You are a lucky man and incredible, indeed, the English books box and your preocupation for Vitamin V were your salvation. But unfortunately now we cross in the Black Sea zone a very insecure period – war, bombs. Who knows what will be in the near future. Have a peaceful stay in Istanbul from now on!

Thank you. Yes, I recently learned about the previous attacks. I didn’t pay attention before. But things get more interesting the closer they become.