“Ahoy” from a rainy Prague.

That’s what sailors say instead of “hi.”

And this week, I’m living on a boat on the Vltava River, so I feel like a sailor. Read More >

Which do you love more?

Phrasal verbs or visiting the dentist?

Karel was The Big Boss.

I taught English at his company every Tuesday and Thursday.

And while his employees got group lessons in the conference room, Karel got private lessons in his office.  Read More >

Not many Americans in Prague these days.

But not these days. Americans are not allowed into most European countries. Nor the Brazilians, nor the Tanzanians, nor the Mongolians.

In fact, these days, the streets are empty except for the locals.

But I’m an exception.

I have something that the other 328 million Americans don’t…

Behind A Closed Door

In October I returned to a very closed Euorpe.

In December I went home for Christmas. Read More >

“You can’t make an omellette without breaking some eggs.”

Have you heard that expression before?

That’s how I feel about speaking. Read More >

This week in
Vitamin V…

We’re talking about what you should do in a conversation.

And… what you should not do. Read More >

Yesterday I told you I made a discovery in 2006 – two years after I started teaching.

While others made A LOT of progress. Read More >

Have you been there? Read More >

When I was a kid I wanted to be black belt in karate.

So I signed up for lessons.

Got my yellow belt.

Like a lot of 11 year-olds, when I discovered it was hard work I chose to ride my bike with my friends instead.

Anyway, my point here is that everyone in karate or kung fu or tae kwon do knows you first get your white belt. And much later you get your black belt.

And… it’s the same with a foreign language.

But most students are skipping steps.

They’re jumping to the last steps or they’re starting in the middle.

And they have problems with speaking and understanding and they don’t know why.

THIS IS STEP NUMBER ONE

If you already have basic grammar and basic vocab, this is the step I give my private students first

It gives them the fastests results in the shortest amount of time.

It’s easy. They do it in their free time. And it only takes a few minutes a day.

And it makes everything else you do in English much, much easier.

So what is it?

But not just any words.

Do you know how many words are in the English language?

English has the largest vocabulary of any language.

171,476 words are in the Oxford English dictionary.

And that’s a depressing number for an English student.

But here’s the good news: you don’t need to know them all.

In fact, you don’t need to know half.

If you want to understand native speaker conversation you only need to know 0.8%.

How Is That Possible?

Even native speakers who went to college and have big vocabularies and interesting things to talk about.

In fact, we love these words so much, 90% of our conversation is just these words.

These 2,144 words are 90% of the words I use, the words the Queen uses, and the words your customer from Manchester uses.

And if you understand 90% that’s good enough.

It’s not perfect but it’s enough to understand and to communicate. (I have British friends and sometimes I think I understand less than 90% of what they say!)

These are what I call “super words.”

So would you like to learn a short list of English vocabulary words and understand 90% of English?

People have been counting words for a long time.

And when the computer was invented, suddenly word lists became big.

In fact, some were huge!

But an English student doesn’t need all those words.

He or she just needs the most important.

What we call the “high frequency words.”

It’s called the General Service List and it contains only the 2,000 most useful words in English.

But there’s just one other problem…

West published his vocabulary list in 1953 (he started making it in the ‘30s).

And as you know, a lot of things – and conversations – have changed since then.

For example, in his list you can find a lot of words about farming and religion.

Which, of course, could be very useful if you’re looking for a job on an Amish farm.

But for the average English student living in the 21st century, the list wasn’t ideal.

And Then… The Discovery

Finally, in 2014 a new group of English teachers made a new vocabulary list.

And this time they made some improvements:

And then… they made it even better!

Somehow they found a way to make it shorter.

In June 2016 they released a new version that has 24% fewer words; and with this list you can still understand the same 90% of TV, film and conversation.

Here’s How To Get Your Super Words Checklist

Ready to find out how many super words you know? 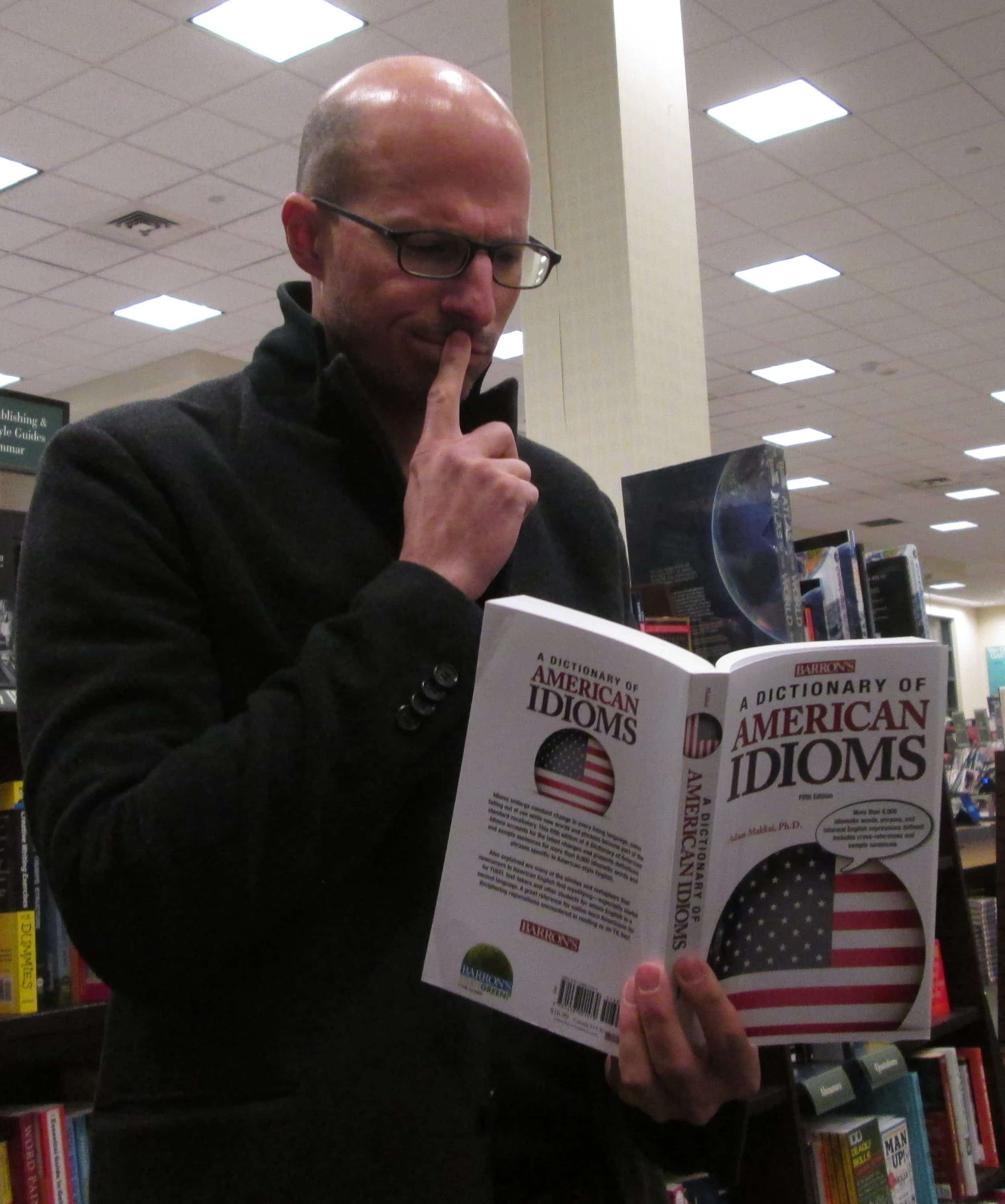 Greetings from the US!

I went home to Virginia for the holidays this year.

And while visiting my sister, I decided to check out a local book store.

Of course, I went right to the language section.

What did I find?

The same boring grammar books and lists of idioms I see students in Europe reading!

If you know my blog, then you know that one of the basic ideas I teach is that you should run away from anything boring.

And run away fast.

Because boredom is the enemy of  learning and remembering.

We pay attention to what’s interesting and forget and avoid whatever is boring.

And if you choose a boring book – like A Dictionary of American Idioms (zzzzzz) – that’s a bad idea because you’ll quickly become bored, you’ll stop reading, and your English will get worse.

So what’s the solution?

Every bookstore sells books which can improve your English vocabulary.

Just reading one of these books will help you learn and remember useful, native speaker vocabulary.

But these books are not in the language section…

In fact, any book that’s not in the language section!

(According to one research study, adults learned 45 words from reading just one short novel. *)

If it’s not, then you’ll become bored, stop reading, and your English will get worse.

Two Book Recommendations From My Sister

Because I stayed with my sister and her family last week, and because she’s a school teacher, and because your reading should also be easy, I asked her to recommend some books.

These are her top two choices for easy reading:

Little House On The Prairie

One of my sister’s favorite books. All her kids read it, and I read it too when I was little. (I liked it, but I think it’s more of a girl’s book.)

It’s the true story about a girl who moves with her family to the American frontier (out west) before there were railroads or electricity.

The TV show based on the book was something my family watched every week.

This one, I remember, I liked more. It’s definitely a boy’s story.

In the 1860s, when Europe still had kings and queens, a boy and his dog hunt in the wilderness of Texas.